The Gernobyl is a secondary weapon for the Engineer class, being released in BBR v1.4.3. It utilises the radiation status effect, designed to complement the Gamma Ray rather than work as an independent defensive device, although it is still capable of being used as a primary. It receives a 5% Speed Boost to compensate.

This gerbil-esque weapon shoots out irradiating globs of light green goo. A hit will cause medium radiation damage and some physical damage. A miss will result in a puddle of goo that will deal radiation damage if stepped on. The goo will split into 2 to 3 droplets of the goo. And is also (without goo) basically impossible to resist.Each puddle of goo shot lasts 4.5 seconds.

Radioactive goo never hurt anyone, unless of course it came from the contaminated mouth of an adorable little mutated mammal. The longer your exposure the greater your chance of death!

The following Equipment affects the Gernobyl:

Here are some pictures of the Gernobyl. 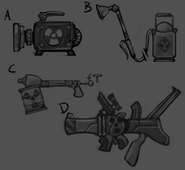 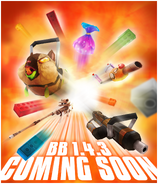 Add a photo to this gallery

Retrieved from "https://battlebears.fandom.com/wiki/Gernobyl?oldid=75544"
Community content is available under CC-BY-SA unless otherwise noted.