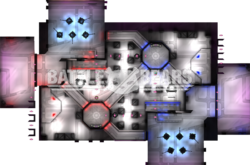 The H.I.P. Test Lab, originally titled Huggable Factory, is a stage in Battle Bears Gold. It was released in the initial 1.0 release together with the No Bear's Land, Desert Airmine and Space Oddity.

The H.I.P. Test Lab is a symmetrical factory-like stage, generally created with two levels where players can move around. Being symmetrical, all rooms are mirrored and designed evenly with the exception of the team colors and each team base.

The team base itself is split into two connected sections, in which players can spawn virtually anywhere. In the first section, a group of tubes, containing Huggables in an unknown fluid, is placed and connected to both floor and roof. The other team base section is a big, empty room with a big downhill entrace.

Each team base has four entrances/exits - two of which are positioned in the Huggable tube section and two near the big spawn room. By exiting two of the top ports, players will now move around on the second floor of the map, which are a series of bridges connecting the bases to two big towers, furthermore connected by a middle bridge. This room is the biggest in the map.

In each end of the stage are placed a relatively steep incline, leading up from the main room lower floor, to the team base of each team respectively. As for the fourth team base entrance, a small two-stage hill is also placed near these at each base.

Around the map are decorations, giving the impression of a true place for manufacturing Huggables, including shipping crates and conveyor belts abundant throughout the factory.There is also an inaccessible loading bay next to each team's base which features a landed Pelican't being loaded with Huggable crates using conveyor belts, against the backdrop of a large ship in space. A small easter egg was added to this stage in addition to these, and used to be accessible by using the Huggable with its primary weapon So Fly. In each side of the stage are a high placed room in otherwise unreachable height. In these rooms, around twenty Huggables are standing in rows, staring at a screen with repeating images of Rho. From this position up high, the Huggable can even reach on top of the stages escalator bonds. This does not serve an actual purpose in the game, although ambushing opponents from above could be an option.

H.I.P. Test Lab is a big metallic stage. The course is made as a 2-level stage with a lot of bridges making for the upper floor and a flat floor with lots of boxes on it making for the lower floor. The team bases are created with a somewhat big room and another smaller room with Huggable-tubes in which are producing new huggables. In the very center of the map, the Bearscream Sandwich can be found on on the upper level bridge, making some players rush to the middle to acquire it first. Shields can be found in the test rooms of both team bases, and two Imperial Basket Grande can be found near the center of the map, atop two crates. In two of the corners, infront of a pile of boxes, Medic Packs are available.

By playing Huggable with So-Fly in this course, players can actually get to a few secret areas no-one else can reach.

The Pickups in the H.I.P. Test Lab can be located at the following locations:

Bearscream Sandwich: Located on the second-floor center bridge connecting the two towers, in the dead center of the stage.

Imperial Basket Grande: Two on each crate right under the Bearscream Power Up. Can be accessed easily with Turkish SW Boots or by falling upon the crate from the second-floor middle bridge.

Health Pack: In the far corners of the maps outside of the bases, near the inclines leading up to each team's base.

Shield: Near the door on the far left of both bases. In simpler speak, in the Huggable Tube room.

In Plant the Bomb mode, the stage will be additionally featured with two bomb tubes and two bomb stands. Both bombs are located under the main bridge next to each other. The bomb tubes are located at each base behind the huggable containers.

Retrieved from "https://battlebears.fandom.com/wiki/H.I.P._Test_Lab?oldid=66967"
Community content is available under CC-BY-SA unless otherwise noted.