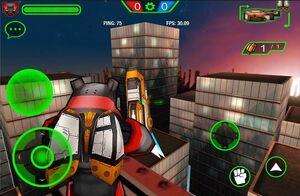 Sky View is a map in Battle Bears Gold. It is one of three maps released on the 2.0 update, along with Skate or Die and Gold Digger. It features skyscrapers and other tall buildings. The map itself is a contruction site high on top of a building. This is the smallest map in Battle Bears Gold so far, and its single-level design makes direct close-range combat almost unavoidable. However, to prevent an all-out shootout, cover in the form of construction tarps, metal poles or planks are placed all around the map, just enough for a wise player to walk around safely. This, however, is made more difficult when facing players with explosive weapons.

It is very easy to suicide on this map due to the numerous gaps and the fact that there are no walls around this map. If you fall into the city, you will suicide.Therefore, suicides are very abundant on this map. Interestingly, some spawn points directly face the edge of the map in such a way that the smallest misstep at the beginning of the match could result in a Suicide.

Overall, surviving on this map without deaths is very difficult due to the teams' close proximity to each other, the susceptibility to Suicide, the bare amount of cover as well as the difficulty in securing health power-ups without exposing yourself to fire.

The Pickups in Sky View can be located at the following positions:

Bearscream Sandwich: Directly behind the blue tarp in the middle of the map, on the Blue team's side.

Health Pack: In front of a small vertical plank on the right side of each team's spawn point, each adjacent to a Shield power-up.

Shield: Behind a small vertical plank on the right side of each team's spawn point, each adjacent to a Health Pack.

In Plant the Bomb, the bombs are placed on opposite sides of the large, light blue tarp in the middle of the map very close to the two teams' spawnpoints. The twist, however, is that they are each placed on the opposing team's side of the tarp, meaning that the player will have to expose themself to an entire enemy team extremely close by. Fortunately, the player will then only have to carry the bomb a short distance to the right corner of their own side.

Retrieved from "https://battlebears.fandom.com/wiki/Sky_View?oldid=66789"
Community content is available under CC-BY-SA unless otherwise noted.